A father exploded because his daughter invited him to her diploma delivery this Saturday at 3:00 p.m. The school event would be during the match between Argentina and Mexico and the man’s messages to his daughter went viral: “I take out a kidney and give it to you. But don’t ask me this.” 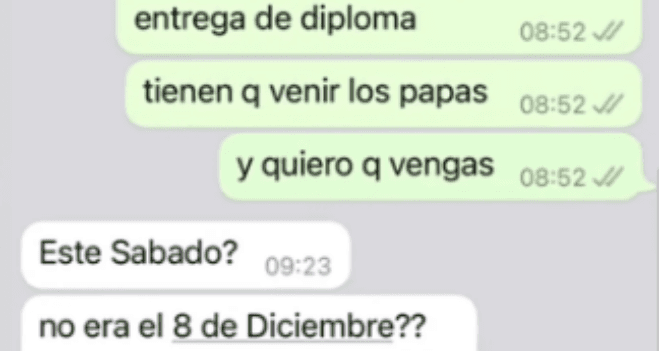 
On Saturday at 4:00 p.m., the Argentine National Team will play a key match against Mexico, which will define their aspirations to continue in the World Cup that is being held in Qatar. For many Argentines, it is an unavoidable appointment with the team led by Lionel Messi; for many others, one more game that they can let go like so many others.

That is why controversy broke out in the networks between one and the other, based on a message in which A young woman told her father that her school had arranged to hand out diplomas to the students who are received on the same Saturday at 3:00 p.m.

The father received the news from his daughter, who invited him to the school event, and he reacted in the worst way, going viral.

“I pay you the psychologist, solve it there. I can’t help you, posta”, sentenced the man, determined to see the decisive game in Messi’s last World Cup. And he added: “I take out a kidney and give it to you. But don’t ask me for this.”

A school put the delivery of diplomas on Saturday 3:00 p.m.

I bank it to the father pic.twitter.com/PDiNAwi4IS

As a last resort, the man asked the young woman’s mother for support. Her desperation moved her, so he asked the girl to stop torturing her father, who didn’t understand anything about her. “I fell for what? Is it f*ck? I have 20 quilombos!” The man exclaimed in another audio.

In a few hours, the video exceeded a million views and a thousand comments from those who were tempted and those who did not see the funny side of it. “I’m sure that if your dad writes the letter, all the parents (even those who didn’t say anything) sign it,” joked one user, while another offered a different solution: “It was your time to ask him for money, ‘yes You give me about 20,000 and I accept that you don’t go to the delivery and watch the game’”.

Alina Moine posted incredible photos from the pool and broke it

Casa Rosada: political and social leaders read the repudiation of the attack against Cristina Kirchner

Boeing in turmoil after another B737 crash

I LOST MY PICTURE OF MYSELF, AND IT’S THE WORST As the end of reality shows approaches, Dalila panics from going out