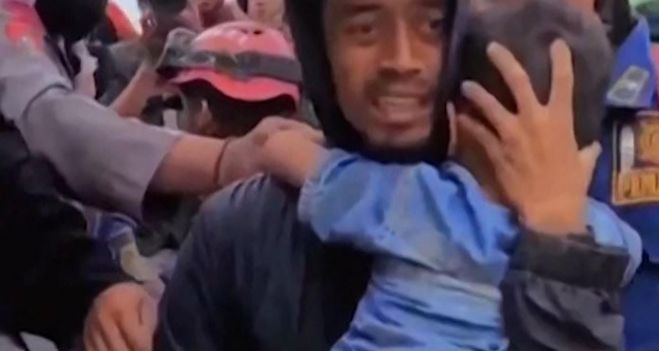 
Indonesian emergency teams They were working against the clock to find survivors after the earthquake that occurred three days ago and has already left 271 dead. Now, They managed to rescue a 6-year-old boy alive who had been trapped in the rubble for two days.

The “miraculous” rescue was caught on camera on Wednesday night and revived hopes that more people could be found alive among the ruins caused by the earthquake that devastated the city of Cianjur in West Java on Monday. Some 40 people were still missing, including a girl rescuers were trying to find.

The little rescued, who is called Azka and is six years old, survived without water or food. “Once we realized that Azka was alive, everyone burst into tears, including me,” Jeksen, a 28-year-old local volunteer, told the AFP news agency today. “He was very emotional, it was experienced as a miracle,” he added.

Video of the rescue, released by the Bogor district administration in West Java, shows rescuers pulling Azka out of a destroyed house in Cugenang district, the hardest hit in the city.

The man who rescued him from a hole in the rubble hugged the boy with both arms, while another lifeguard ran after him holding the boy’s hand.

Then Azka is seen calmly having a drink in the arms of a soldier, with an emergency worker stroking her hair.

A 6-year-old boy was pulled out alive after surviving more than two days under the debris left by a powerful earthquake in Indonesia https://t.co/M7dKniOs7K pic.twitter.com/0m63OtIeWM

The body of the child’s mother had been found lifeless hours before. In addition, together with the little one, they found the corpse of his grandmother.

The boy was saved thanks to a wall that supported another collapsed wall and prevented it from falling on him, local media reported. Many of the quake victims were children trapped in their schools or in their homes, authorities said.

Rescue work is hampered by heavy rain and the threat of deadly aftershocks. “Today we have deployed 6,000 people for the search and rescue operation. It is raining but we are still searching,” said the head of the national disaster management agency, Suharyanto.

The latest balance, from Wednesday night, of 271 deaths, could still increase. Some 2,000 people were injured by the strong tremor of a magnitude of 5.6.

Indonesian President Joko Widodo was at the scene of the tragedy for the second time on Thursday.

In October, San Juan registered a 5% drop in electricity consumption

Export opportunities between Armenia and Iran were studied

Production met with the pistachio sector to work together

The expectation worsens: they estimate that annual inflation would climb to 65.1%, according to consultants