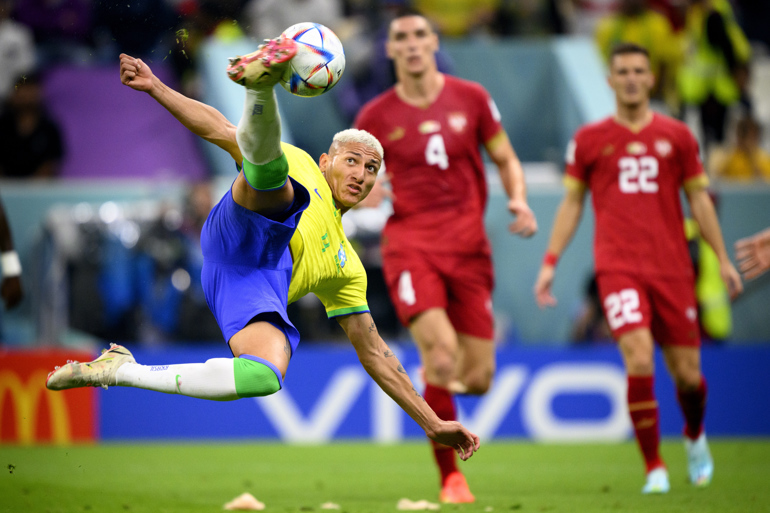 
Brazil is in the World Cup, Brazil is a candidate. The five-time champion was still unable to break the 0-0 deficit in her debut match at the Qatar World Cup that faces Serbia. Raphinha had had the two best chances of the ‘Canarinha’ that frustrated the goal Vanja Milinkovic-Savic but in the second half the goal came close.

Control with the left, time stops and Richarlison does a Chilean and impales the ball with his right hand. The Brazilian, with two flashes of quality and one of the World Cup goals, defeated a worked and very defensive Serbia, and puts the ‘Canarinha’ at the pace of the best (2-0)

First Alex Sandro fired a shell from outside the area that repelled the post and shortly after Richarlison broke down the Serbian wall to open the scoring in the 61st minute by picking up Vanja’s rebound after a low shot from Vinicius.

The favourite, the one looking for the sixth star, leaves the Lusail stadium happy with the three points, but it was not easy. Quite the opposite. It was difficult for Brazil to get their hands on the game. In fact, the first part was one of the most insipid of this first day of the World Cup. The Lusail Stadium, with a capacity for 80,000 spectators, was lucky that one of the fans was the Brazilian, who painted color for about 45 minutes to forget.

Brazil goes on to lead the group, since in the other game of the same, Switzerland beat Cameroon by a goal to nil.

With a serious gesture, he withdrew. neymar of Brazil-Serbia after suffering a blow and was substituted ten minutes from the end, with a face of few friends.

It could have been a precaution or not, but Tite, the Brazil coach, decided to remove the player from the field paris saint germain and not take risks in a World Cup that aims to be long for the ‘Canarinha’.

Guaidó: "The agreement, the primary and the presence on the street, are all mechanisms to achieve the election that they owe us"

If you have nothing to do, why do you come and go with thousands of cars, helicopters, receive a salary from public funds? Tadevos Avetisyan to the authorities

Covid 19 situation/ Ministry of Health: 19 new cases and no loss of life in the last 24 hours

The former fattest in the world, lost 258 kilos

Armani after the defeat: “We cannot afford a start like this”